induced by the current crisis of the Italian government this post examines the open data of the Chamber of Deputies to understand part of the political context in which the crisis broke out.

The Chamber of Deputies is a component of the Italian Parliament which also includes the Senate of the Republic, both of which are equal in functions and powers. Parliament passes legislation, directs and monitors government activities, investigates matters of public concern, and grants and revokes trust in the government. Sitting in joint session, the Parliament also elects the President of the Republic, some judges of the Constitutional Court as well as members of the Superior Council of the Judiciary.

This post explores the composition, organization and activity of the Chamber of Deputies using the linked data provided by data.camera.it.

data.camera.it is a platform for publishing and sharing Linked Open Data on the activities and bodies of the Chamber, to be downloaded or interrogated freely.

The main features of this data are:

Currently the Chamber counts 629 deputies in this eighteenth legislature started on March 2018. The following sections describe the deputies in respect of their political group, personal characteristics, education and Chamber experience.

In order to do this the deputato class included in the Deputies Chamber Ontology (OCD) of data.camera.it has been queried.

The deputato, subclass of persona, identifies the person who has played some role in the Chamber of Deputies and in particular who has a parliamentary mandate: a deputy.

The rules of the Chamber provide that each deputy must belong to a parliamentary group. The “mixed” group brings together Members who do not belong to any other group. At least twenty deputies are needed to form a group in the Chamber.

Note that the parliamentary group to which the deputy belongs at this time could not coincide with the political party for which he was elected.

As Stream of Data Consciousness is not a political commentary blog and to give an idea of the political area of the parliamentary group, their position within the Chamber is reported from left to right:

Deputies that are elected in a political parties could then move to a parliamentary group that is not the corresponding one. These moves can happen anytime during the legislature.

The following visualization shows how many deputies moved to parliamentary group politically different from the original party. 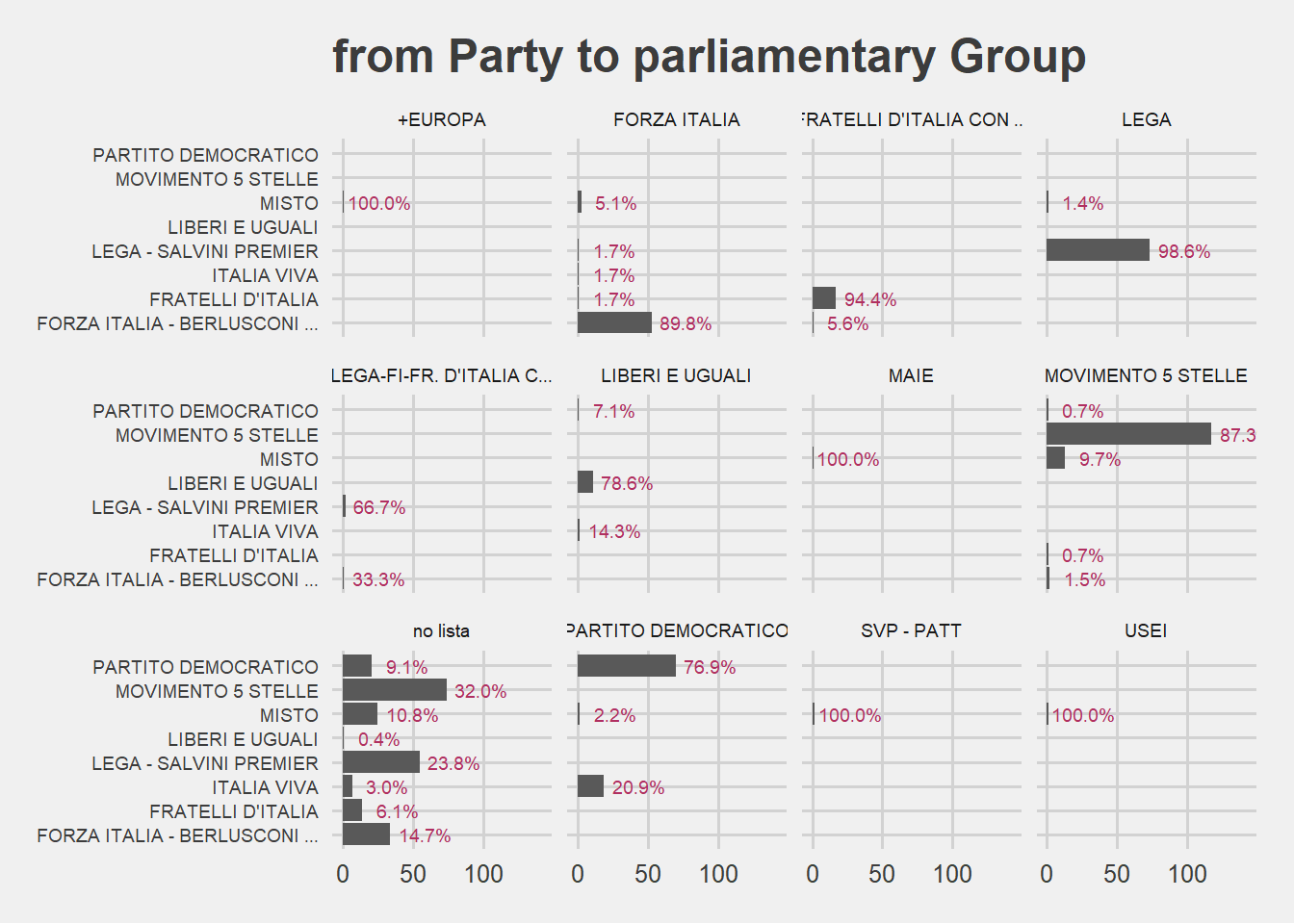 A patrol of Movimento 5 Stelle elected deputies are registered in Gruppo Misto. Italia Viva is a parliamentary group born from the split from Partito Democratico party. Other political parties have few deputies moved to politically contiguous groups or to Misto group as independent.

+Europa, MAIE, SVP, USEI deputies are all registered in gruppo MISTO because their party group does not overcome the 20 members threshold.

Gender gap is highly present in the Chamber being male deputies almost twice as female ones as shown in the bar plot below.

The age of the deputies ranges from almost thirty to more than eighty years with female being younger on average. 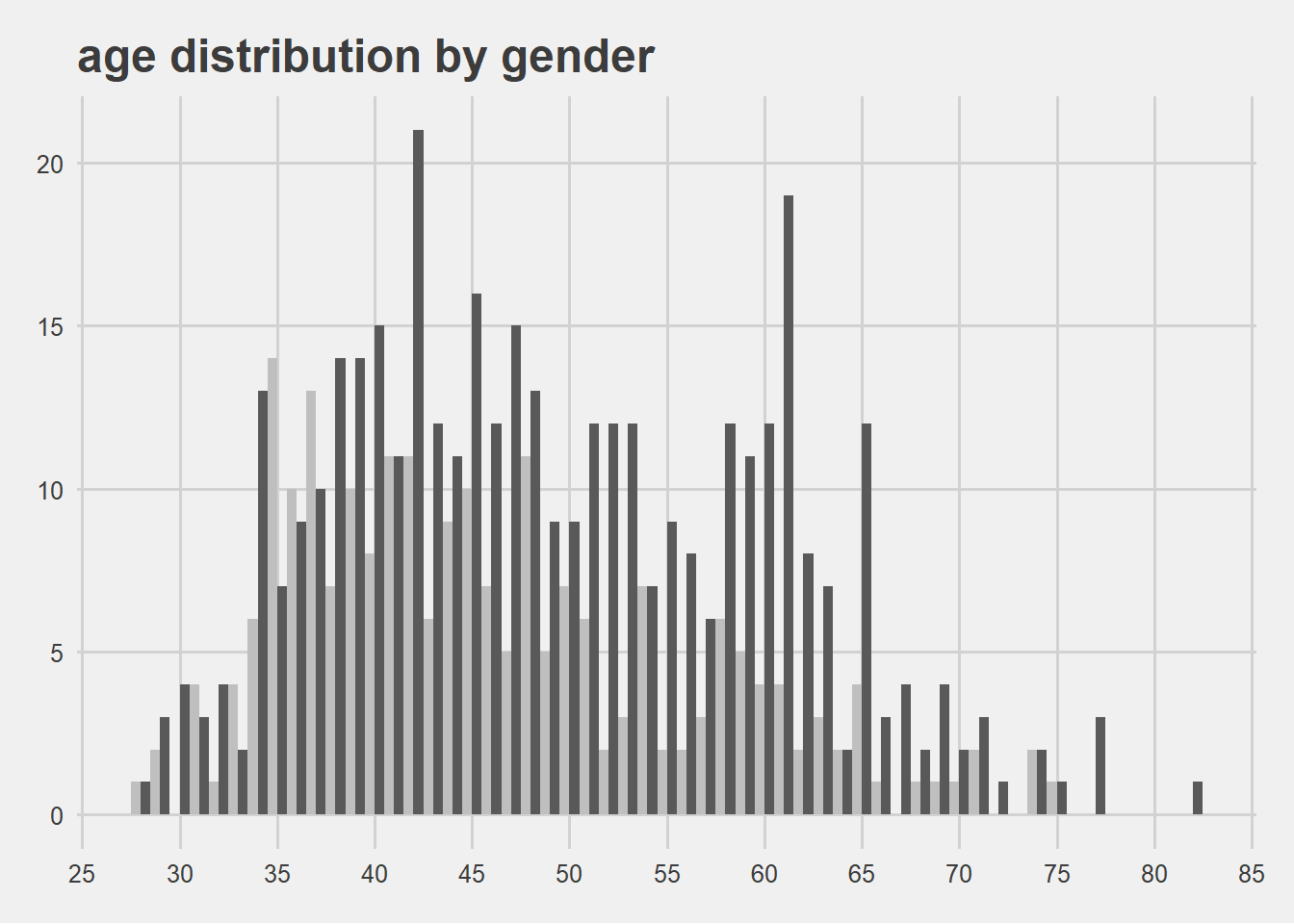 Youngest and oldest deputies belongs to the following parliamentary groups.

From the provided data it is possible to extract from the info field the education level of the deputy as visualized below. 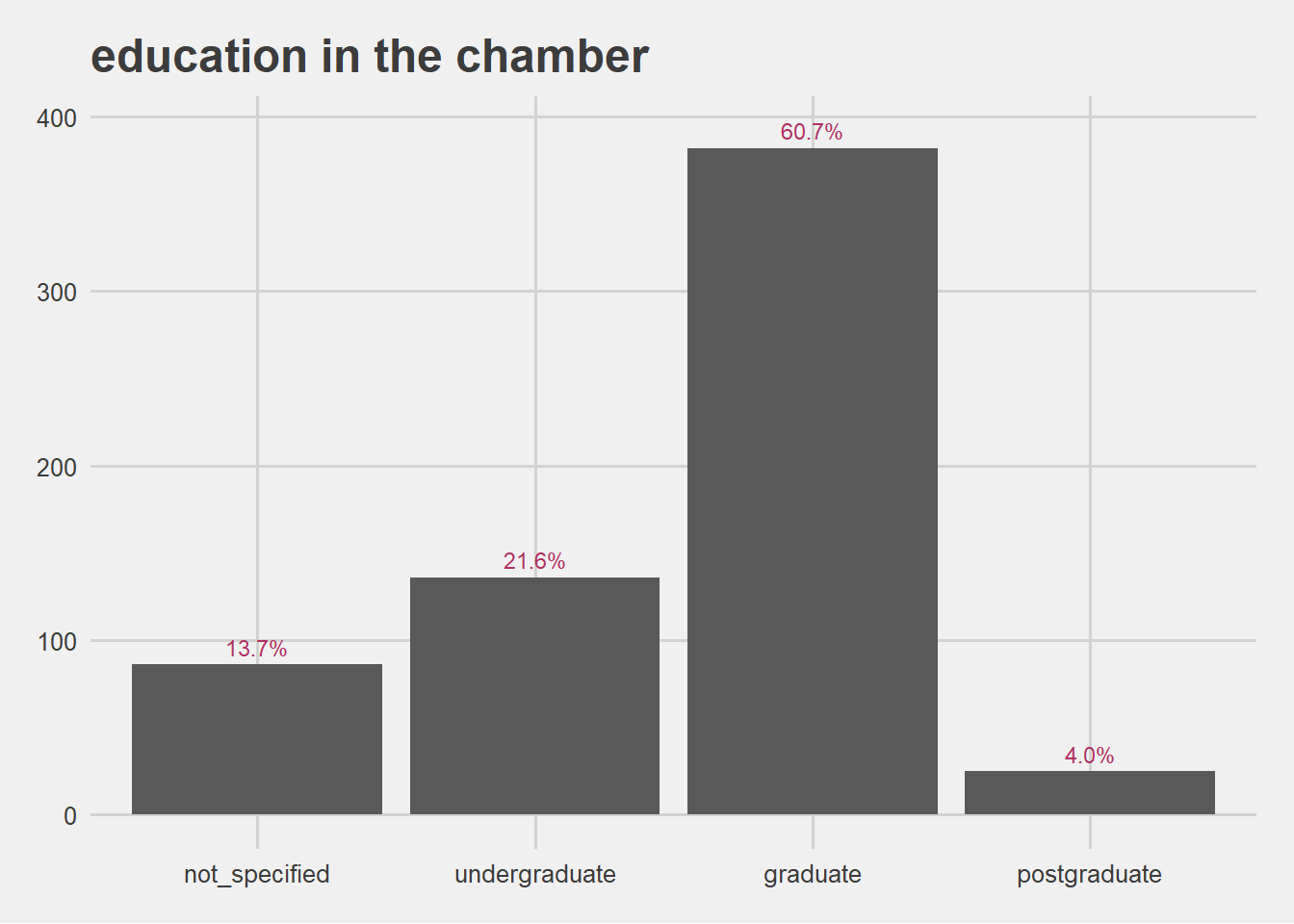 Most part of the Chamber is composed by graduate deputies.

In order to measure political experience the mandates distribution present in the Chamber of 18th legislature has been drawn in the graph below. 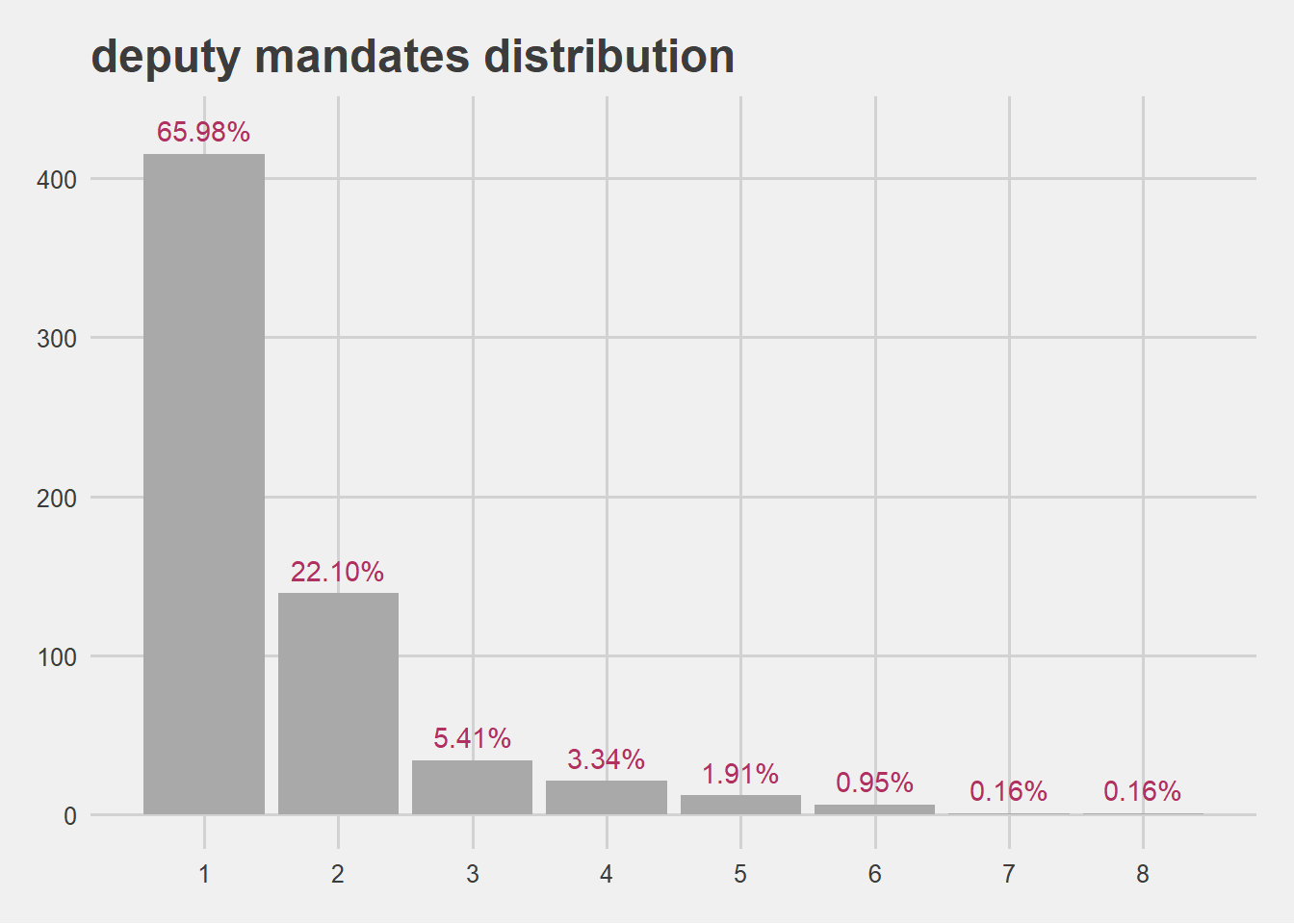 It appears clearly that the deputies majority are rookies at their very first mandate. At the same time experienced deputies with more than 2 mandates are very few.

The most experienced deputies belongs to the following parliamentary groups:

During the XVIIIth legislature, Italy had 2 governments as of February 1, 2021.

Overall the chamber has held the following posts in the governments.

In the below visualization it is shown how many and which government posts have been covered by deputies. 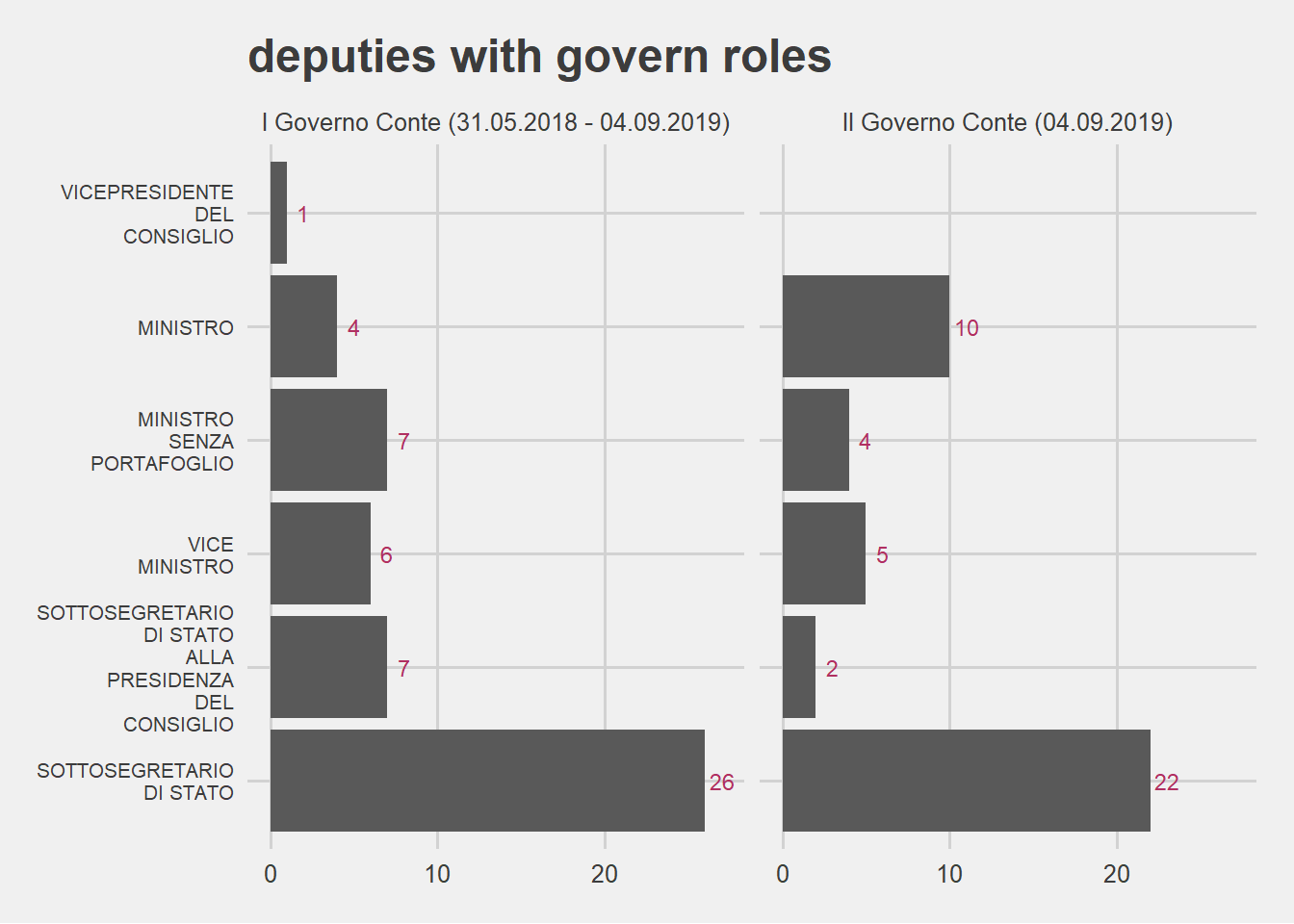 In the second Conte government the Chamber provides:

The chamber has 2 fundamental roles: controlling the government and legislative activity. In legislature XVIII, the Chamber discussed 2907 proposed laws.

In order to do this the atto class included in the Deputies Chamber Ontology (OCD) of data.camera.it has been queried.

The class atto contains proposals and bills discussed in the Chamber.

Laws discussed in the Chamber of Deputies can be proposed by:

In legislature XVIII the discussed laws distribution by initiative is as displayed below. 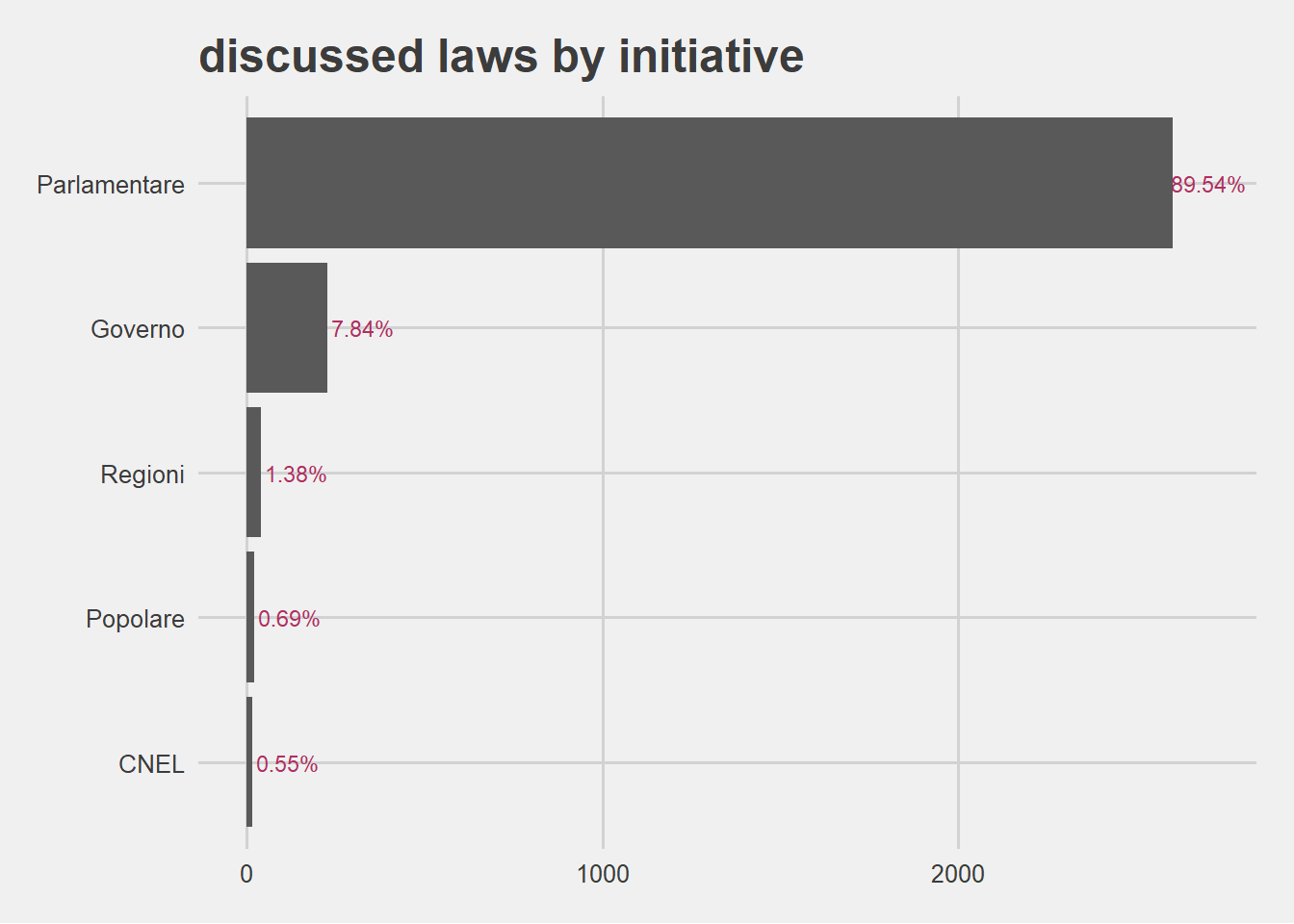 from proposals to laws

Till the date of publication according to open data, the legislature XVIII parliament passed 186 laws converting only 6.4% of the proposed acts. It is interesting to note the distribution by initiative. 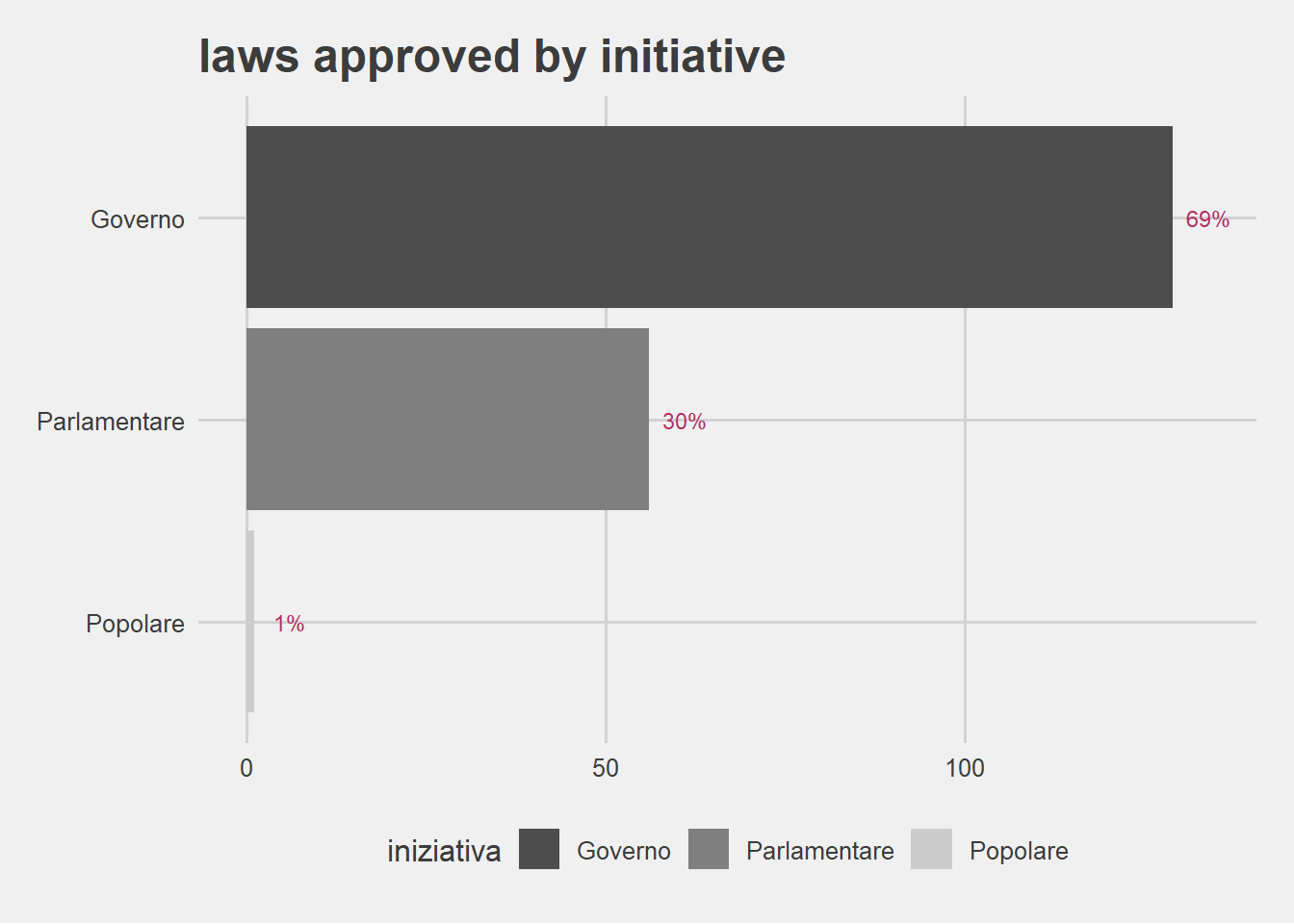 Visualizing days needed to convert the proposal from the presentation date to the final approval, it is possible to note that the time distribution varies depending on the initiating institution.

The times for the approval of the laws of parliamentary initiative are lengthened and in extreme cases they reach 600 days. On the contrary, the laws proposed by the government seem to have a shorter and more concentrated process.

Retrieving all the voting data available no vote has been recorded after March 04, 2020 . The author does not find any valid reason why parliament transparency offered by open data has been suspended. 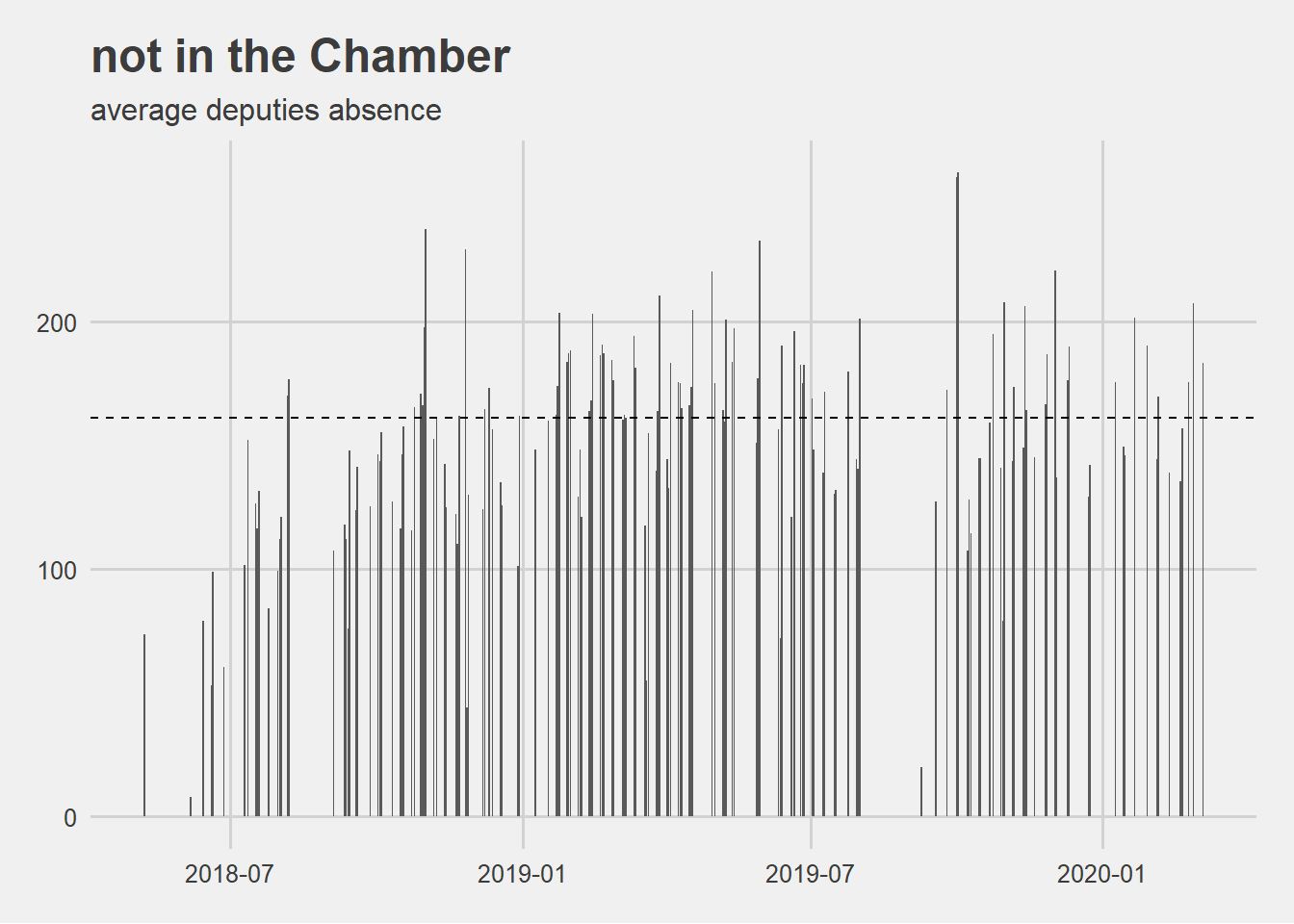 Chamber voting sessions of the XVIII legislature showed a high absence rate till March 2020: on average 25.6% of the deputies do not attend to voting sessions.

From this analysis it turns out that the Chamber of the XVIII legislature is not so productive.

The author is conscious that this is quite a generic claim since no comparative study has been performed or reported and furthermore productivity could be questionable as a performance metric for a parliament branch.

In any case low laws conversion rate, government initiative higher efficacy in respect of parliament initiative, absences from vote sessions represent warning signs of a suboptimal functioning of the Chamber.

As a final consideration, this article intends to emphasize that open data helps digital citizens to monitor political activity that would otherwise only be carried out with the mediation of the press.

Updating open data constantly would demonstrate that the so called digital transformation policies are taken in consideration.

The analysis shown in this post have been executed using R as main computation tool together with its gorgeous ecosystem (tidyverse included). In particular data has been retrieved using SPARQL R package.